Against the Aeon Throne, 3 of 3: The Rune Drive Gambit 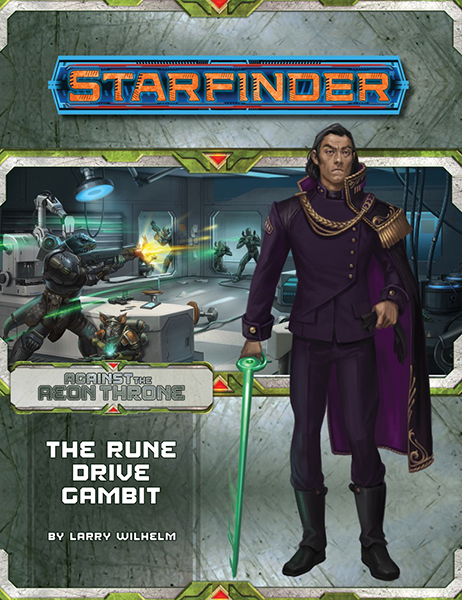 Against the Aeon Throne, 3 of 3: The Rune Drive Gambit

The heroes must infiltrate a secluded Azlanti science facility, liberate the captive scientists forced to study an experimental starship drive, and keep the device out of their enemies’ hands. They soon learn of the drive’s reality-warping power firsthand, but standing in their way is the dastardly Azlanti noble who has orchestrated the entire plot!

This volume of Starfinder Adventure Path concludes the Against the Aeon Throne Adventure Path and includes:
•”The Rune Drive Gambit,” a Starfinder adventure for 5th-level characters, by Larry Wilhelm.
•Advice on how you can continue your campaign past the final encounter and how the Azlanti Star Empire will be empowered should the heroes fail, by Tracy Barnett.
•A detailed exploration of the peacekeeping organization known as the Stewards, including a pair of new archetypes for Stewards agents, by Lyz Liddell.
•An archive of new creatures, from a fey creature born of a comet to an aberration that exists on multiple planes simultaneously, by Ian Eller, David N. Ross, and Larry Wilhelm.
•Statistics and deck plans for a royal Azlanti luxury vessel, by Larry Wilhelm, plus a glimpse of the home world of the Azlanti Star Empire, by Owen K.C. Stephens.