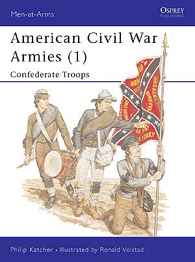 When the Southern states seceded to form their own government in 1861, one of their first moves was to organise an army. The South’s fighting men served from the time of their enlistment until the end of the war, receiving poor rations, and even worse clothing – and this despite the fact that one of the first steps taken by the new army was to design a uniform and establish standards for accoutrements and weapons. In this first of five volumes examining American Civil War armies, Philip Katcher profiles the uniforms issued by the national Confederate government to its artillery, cavalry and infantry troops.