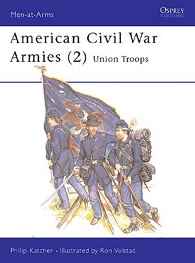 The US Army during the Civil War was the largest the country had raised in its brief history; and it would remain the largest ever raised until World War I. In all, 2,772,408 men served in some branch or other of the US Army. This detailed work by Philip Katcher is a comprehensive guide to the uniforms, accoutrements, insignia and weapons of the Union Troops who fought the American Civil War, with a wealth of illustrations, including contemporary photographs and eight full page colour plates by Ron Volstad.