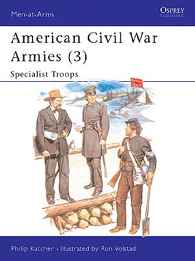 At the time of the American Civil War, with two million men under arms, a US Army that in pre-war days had depended upon a minute number of technical troops now required virtually an army of specialists alone. Special sharpshooters were recruited for skirmishing duty; men whose wounds would have led to their discharge in the past now found themselves guarding important posts in the Veteran Reserve Corps; and large numbers of civilians found themselves in uniform as members of the Telegraph or Hospital Corps. Philip Katcher examines the organization and uniforms of the specialist troops who served in the armies of both sides.