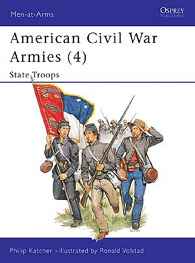 The War between the States’ is the term used for the American Civil War throughout much of the South even today. Many on both sides – not just the South – felt that they were serving their states as much, if not more, than their central governments. Many of the states agreed; the state governments raising their own units, commissioning their officers, and supplying their men. Indeed, many of the units that fought the Civil War were supplied in large part by their own states rather than by the central government’s quartermasters. Philip Katcher’s fascinating text explores the uniforms of 32 states; from Alabama to Wisconsin.