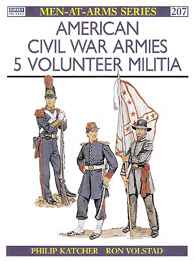 Uniformed volunteer units were raised by individuals, usually from an area’s social élite who had enough spare money and time to spend on such enthusiasms. They voted on their unit designation, their officers and non-commissioned officers, their unit rules, and their uniform. Many future leaders learned their skills in these ranks, and volunteer militia units formed the core of many fighting units on both sides of the Mason-Dixon line. With the help of numerous photographs and illustrations, including eight full page colour plates by Ron Volstad, Philip Katcher does a fine job of detailing the uniforms of the volunteer militia of the American Civil War.