Ancient Armies of the Middle East 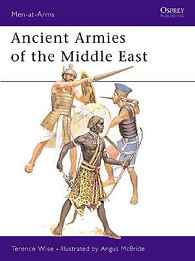 Ancient Armies of the Middle East

This text by Terence Wise explores some of the fascinating peoples who comprised the ancient armies of the Middle East: the Sumerians, who were the first to introduce the use of bronze into warfare, and were centuries ahead of the Egyptians in the use of the wheel – The Akkadians, whose citizen army was composed almost entirely of light troops – The Babylonians, whose people were granted land in return for army service – the horned warriors of the Elamites – the Egyptians, with thier heavy spearmen and archers – the tribal and warlike Libyans – Nubians and Ethiopians – Hyksos – the armies of the Hittite Empire – the Sea People and others.