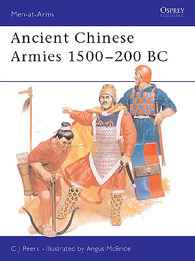 By the 15th century BC the valley of Hwang Ho was dominated by a palace-based military caste which owed its supremacy to a monopoly of bronze-working techniques among a still mainly Stone Age population. To the Shang Dynasty, war was a means of legitimising the power of their new aristocracy. This fascinating volume by C. J. Peers covers the period of China’s history from the first documented civilisation to the establishment of an enduring unified empire, examining the history, organisation, uniform and weapons of ancient Chinese armies.