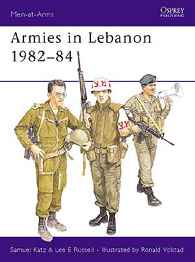 The Lebanese Civil War of 1975-76 caused 80,000 dead and totally split the country along factional lines. An estimated 50 different militias came into existence, and acts of violence were both individual and collective. In the midst of this explosive atmosphere, cross-border conflict between Israel and Lebanon intensified, culminating in Operation Peace for Galilee – the invasion of Lebanon. This book offers a day-by-day account of the invasion and the subsequent siege of Beirut, an operation that resulted in both the PLO and Israel claiming victory. Numerous photographs and colour plates portray the uniforms and equipment of the Israeli, Palestinian and Multi-National forces.