Army of the Potomac 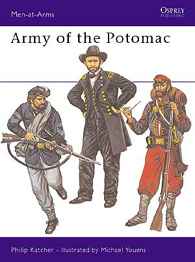 Army of the Potomac

For General George B. McClellan, the dejected Union troops who poured into Washington fresh from defeat at Bull Run on Monday 22 July, 1861, were to provide the raw material which he would train, equip, organise and ultimately transform from a mere mob into an effective fighting force. In October 1861 the Army of the Potomac officially came into being. This entertaining volume from the same team of author Philip Katcher and artist Michael Youens who produced Men-at-Arms 37 The Army of Northern Virginia, explores how this transition came about, with a particular emphasis on weapons, uniforms and equipment.