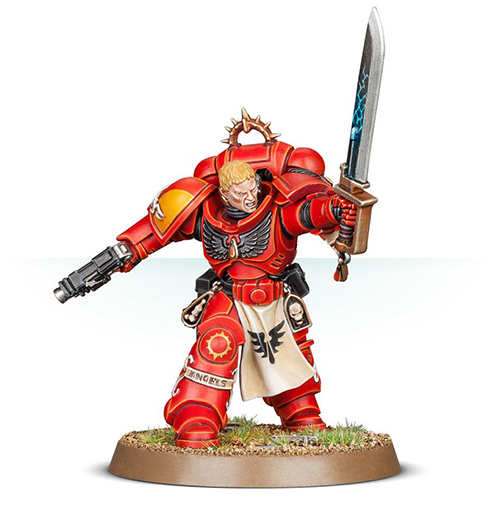 Lieutenants act as the right hands of their Captains by providing flexibility and helping to direct their battle-brothers in engagements. Battle Companies are often split into 2 Demi-companies, each of which falls under the command of a Lieutenant who leads his brothers unflinchingly into battle. Blood Angels Lieutenants are expected to take command, should a superior officer fall to the Red Thirst, and assume the role of the Sword of Sanguinius – failure is the only unforgivable sin in this role, while victory excuses any amount of savagery.

This multi-part plastic kit contains the components necessary to assemble Lieutenant Tolmeron of the Blood Angels. Clad in Mk X ‘Tacticus’ power armour, Tolmeron comes with a power sword and bolt pistol – he can be modelled either holding the bolt pistol along with the power sword, or carrying the pistol in a belt-mounted holster. He’s covered in appropriate Blood Angels iconography, from the sculpted shoulder pads to the iron halo atop his backpack. You have the choice of modelling Tolmeron with either a Blood Angels helmet, or a bare head with a huge scar across the right eye.

Lieutenant Tolmeron comes as 15 components, and is supplied with a Citadel 40mm Round base.