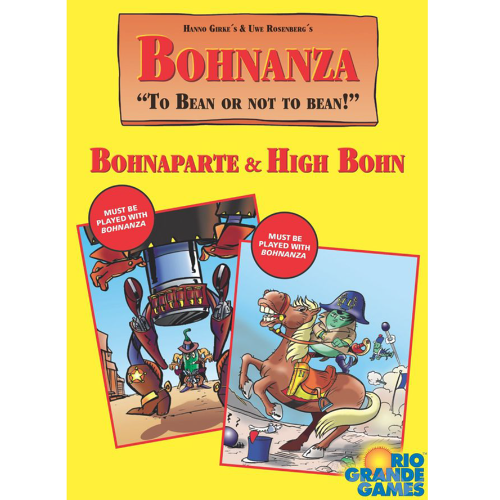 With Bohnaparte, players get to conquer the Bohnreich, territory created with new cards included in this expansion! Each player receives counters of his own colour, and play then loosely follows that of normal Bohnanza, with an important difference: Earned bean coins are not saved but are used to finance your conquests throughout the Bohnreich. In the end, the only thing that matters is who has the largest part of the Bohnreich under control. Battling is accomplished using the numbers on the bean cards, which gives new significance to the formerly “weaker” bean types. Designer Hanno Girke describes the expansion set as “Bohnanza meets Risk”.

High Bohn Plus contains new game variants and two new bean types, the Cognac bean and the Field bean. With High Bohn, the players may spend their thalers on buildings located in Virginia City. These building have attributes that give the players new tactics for winning. The Plus part of this expansion adds Field Beans (for 4-5 players) that can be harvested for a third field and Order cards (for 3-7 players) that allow players to earn extra thalers when they can fill very specific orders.