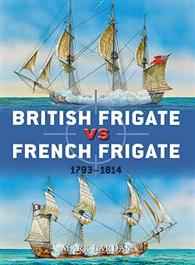 In the Age of Fighting Sail (1650-1820), ambitious officers of the navies of many nations sought command of a frigate. Speedy, nimble and formidably armed, frigates often operated independently, unlike the larger ships of the line. Legendary sailors such as Edward Pellew and Charles-Alexandre Leon Durand, Comte de Linoise, found that commanding such a ship offered numerous opportunities for wealth. In this book, four representative frigate duels are examined: first, a battle fought between two closely matched ships (HMS Nymphe (36) vs La Cleopatre (32); second, a victory won by an inferior British frigate over a superior French frigate (HMS Pallas (32) vs Minerve (40); third, a victory – the only one – by an inferior French frigate over a superior British frigate (HMS Ambuscade (32) vs Baionnaise (24), and fourth, victory of a superior British frigate over an inferior French frigate (HMS Indefatigable (44) of Hornblower fame vs La Virginie (40). Featuring specially commissioned artwork and offering expert analysis, this study provides a vivid account of the bloody combats fought by the most romantic warship of the Revolutionary and Napoleonic era – the frigate.