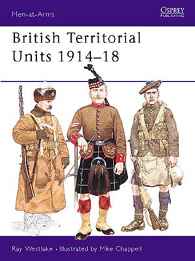 In his Army Reforms of 1906/07 the Secretary of State for War, Richard Burdon Haldane, provided for an expeditionary force – the Regular Army supplemented by the old Militia – and a new organisation intended for home defence, the Territorial Force. This new ‘Citizen’s Army’ was formed by the transfer of the Honourable Artillery Company, Imperial Yeomanry and Volunteer Force, all with many years of service and tradition. At the outbreak of war, the Territorial Force was organised as per the Regular Army, with infantry battalions, artillery, engineers, supply and medical formations. This title takes a highly detailed and illustrated look at the badges and uniforms and the changing organisation of the British Territorial units during the Great War. It also covers the combat experiences of the men who soon found themselves in service overseas, in the thick of the fighting.