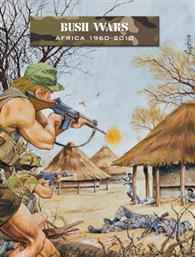 With its many tribal, political, religious, and cultural divisions, Africa has long been a continent at war – both with itself and with others. For much of the 20th century, there has been a near-constant state of military unrest, from Cold War proxy wars with Soviet and Western powers supporting their African allies in live-fire incarnations of this ideological struggle, and revolutions against established regimes, to foreign interventions under the banners of peacekeeping and mercenary operations alike. Bush Wars, the latest Force on Force companion, brings this hotbed of unrest to the wargaming table with scenarios, orders of battle and background information.