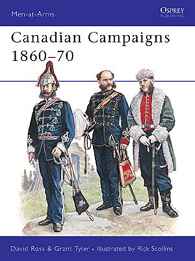 As the US Civil War was raging, between 1860 and 1870 Canada was involved in its own series of military events. The large British Army presence in Canada, due largely to the tensions caused by the Civil War; the Fenian Raids of 1866 and 1870; and the Red River Expedition have often been overshadowed by events south of the border. Enhanced by full colour plates and rare photographs of Montreal photographer William Notman, this fine text examines the Canadian campaigns from 1860-70, while illustrating the uniforms of the Canadian Volunteer Militia, the British Army and staff officers.