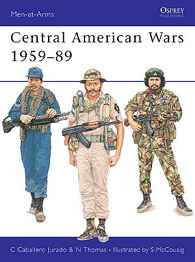 Once predicted to be ‘the Middle East of the Year 2000’, Central America and the Caribbean have long been a powder keg of revolutionary activity and guerilla warfare. The United States, with important strategic and economic interests in the region, has traditionally opted for a military solution toward the political upheaval, developing a range of responses, from direct military intervention to the training of tens of thousands of Latin-American soldiers in anti-guerilla warfare techniques. This text, enhanced by colour plates and numerous photographs, examines the history of the Central American Wars by country, detailing the organization and uniforms of the combatants.