Chasseurs of the Guard 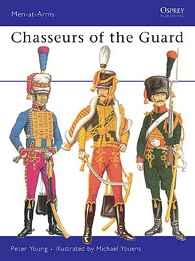 Chasseurs of the Guard

The Chasseurs of the Guard had its origins in the Guides raised by General Bonaparte during his Italian Campaign of 1796. Not only did the Chasseurs prove to be excellent soldiers, but they also served as Napoleon’s immediate escort whenever he went on campaign. This book provides an overview of the regimental history of the corps, profiling some of its most memorable personalities, including Jean-Baptise Bessieres, Marshal of France, and Prince Eugene de Beauharnais, Commander of the Chasseurs a cheval. The uniforms, guidons and standards of the Consular Guard, later renamed the Imperial Guard, are illustrated throughout the book.