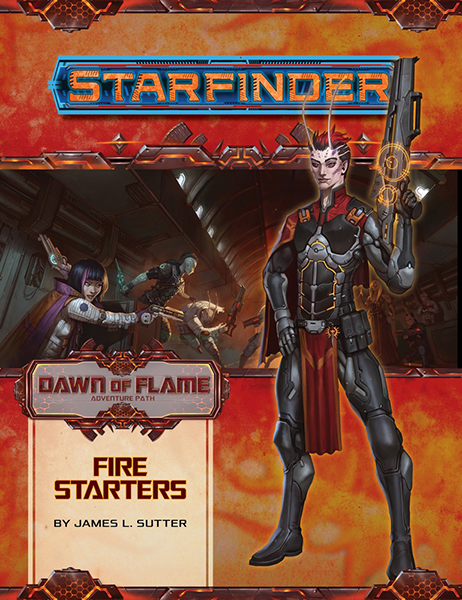 It Takes One Spark

A magical portal to the Plane of Fire disappears into the sun just after something exits it for the first time in recorded history. An overwhelming telepathic burst from within the star quickly follows, and a scientist recruits the heroes to help her find out what’s going on. The mission takes the heroes to a lashunta enclave called Asanatown in the Burning Archipelago, a bubble-city in the sun’s atmosphere, to meet with another scientist who can help. Before that meeting can happen, however, the psychic disturbance leads radicals among the telepathically sensitive lashuntas to take matters into their own hands, closing Asanatown off from the rest of the sun-based city. Trapped, the heroes must rescue their contact and return power to the proper authorities to escape!

This volume of Starfinder Adventure Path begins the Dawn of Flame Adventure Path and includes:
•”Fire Starters,” a Starfinder adventure for 1st-level characters, by James L. Sutter.
•A survey of Asanatown, the lashunta enclave within the Burning Archipelago, by Jason Tondro.
•A look at the Church of Sarenrae and its worshippers from the Pact Worlds and beyond, as well as new equipment for those devoted to the Dawnflower, by Patrick Brennan.
•An archive of extraplanar threats, from ifrits touched by the Plane of Fire to the chaotic rifti proteans, by Leo Glass, Owen K.C. Stephens, and James L. Sutter.
•Deck plans and statistics for a Sarenite vessel that patrols near the sun, by Jason Keeley, and a look at a beautiful resort planet with ties to the Plane of Water, by Lacy Pellazar.