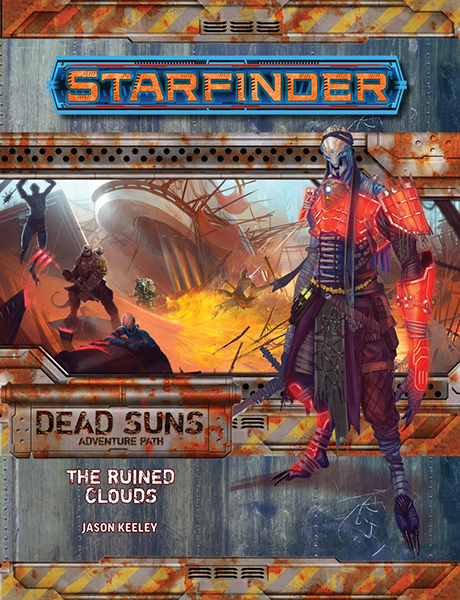 Still on the heels of the Devourer cult, the heroes head to a distant, uncharted star system, where they find the ruins of an ancient alien city floating in the atmosphere of a gas giant. Exploring the ruins, they encounter the degenerate descendants of a highly advanced species that once controlled the lost superweapon the heroes are searching for. Through the legends and superstitions of these primitive folk, the heroes can piece together clues to the superweapon’s hidden location and the key to unlocking its power—an impossibly huge megastructure that the Cult of the Devourer is intent on seizing!

This volume of Starfinder Adventure Path continues the Dead Suns Adventure Path and includes:
•”The Ruined Clouds,” a Starfinder adventure for 7th-level characters, by Jason Keeley.
•Details about the Drift, the mysterious plane of existence revealed by the god Triune that allows faster-than-light travel, including information about notable locations such as the holy city of Alluvion and the dangerous doldrums, by Joe Pasini.
•A gazetteer of Istamak, the floating city of Nejeor VI where the descendants of a once-powerful star empire struggle to survive in the ruins of their ancestors’ civilization, by Jason Keeley.
•An archive of new creatures, from living holograms and twisted mutants to supernatural agents of the Devourer, by Jason Keeley and Owen K.C. Stephens.
•Statistics and deck plans for a new starship from the secretive Azlanti Star Empire, plus an overview of the gas giant Nejeor VI in the Codex of Worlds, by Jason Keeley.