Dutch-Belgian Troops of the Napoleonic Wars 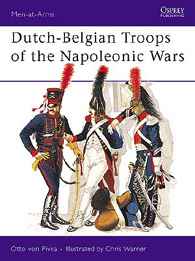 Dutch-Belgian Troops of the Napoleonic Wars

In a desperate attempt to stop the trafficking of British goods, Napoleon absorbed Holland, parts of Westfalia, the Duchy of Oldenburg and the Hanseatic towns of Hamburg, Bremen and Lübeck into Metropolitan France in 1810. The armies raised from these areas fought as allies of the French or as part of France itself from 1795 to 1813. This book examines the history, uniforms, orders of battle and colours and standards of the troops from the Batavian Republic and its short-lived status as the Kingdom of Holland. The text is enhanced with numerous illustrations, including maps, charts and detailed colour plates.