Eternal Empire: The Ottomans At War 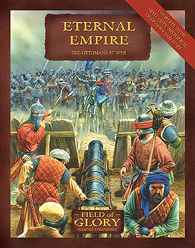 Eternal Empire: The Ottomans At War

Take command of the mighty forces of the Ottomans, their enemies and neighbours – from the steppe cavalry of the Tatars and Timurids, to the Polish and Teutonic knights, and the implacable armies of the Jan Zizka’s Hussites or Vlad Tepes’ Wallachians. With Eternal Empire, the new Field of Glory companion, you too can take the Ottoman nation from a humble Anatolian state to an Empire commanding the Middle East and much of Eastern Europe. Complete with organisation charts for hundreds of accurately researched troop types, detailed historical overviews and supporting maps and artwork, this addition to the core rulebook will dramatically enhance your gameplay.