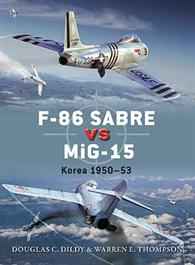 As the routed North Korean People’s Army (NKPA) withdrew into the mountainous reaches of their country and the People’s Republic of China (PRC) funneled in its massive infantry formations in preparation for a momentous counter-offensive, both lacked adequate air power to challenge US and UN. Reluctantly, Josef Stalin agreed to provide the requisite air cover, introducing the superior swept-wing MiG-15 to counter the American’s straight-wing F-80 jets. This in turn prompted the USAF to deploy its very best – the F-86A Sabre – to counter this threat. Thus began a two-and-a-half-year struggle in the skies known as “MiG Alley.” In this period, the unrelenting campaign for aerial superiority witnessed the introduction of successive models of these two revolutionary jets into combat. This meticulously researched study not only provides technical descriptions of the two types and their improved variants, complete with a “fighter pilot’s assessment” of these aircraft, but also chronicles the entire scope of their aerial duel in “MiG Alley” by employing the recollections of the surviving combatants – including Russian, Chinese, and North Korean pilots – who participated.