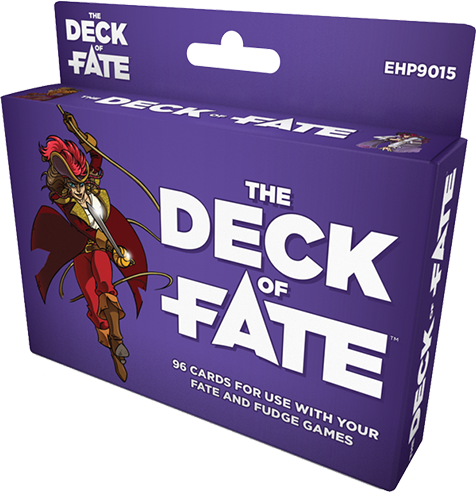 The Deck of Fate is actually three decks in one! You can combine them together if it suits your play goals, or use them separately for a variety of purposes. In this package you’ll find:
•A 6-card “Accelerated Arcana” deck: Six inspirational images, one for each of the approaches from Fate Accelerated.
•A 9-card “Core Arcana” deck: Nine inspirational images covering nine concepts, with “aspect style” positive and negative takes on each.
•An 81-card “Dice Card” deck: Shuffle this deck and draw to simulate the toss of four Fate Dice. Inspirational phrases are found on each card to give you cues on how to interpret the result.

SECRETS OF THE DECK OF FATE
•The backs of the cards can double as fate point counters.
•You can shuffle the Accelerated Arcana and draw from it to randomly determine your approaches for your Fate Accelerated character: first draw is the +3, etc.
•Draw from the deck to randomly determine a character’s aspect—or at least get a good starting-point. This works especially well with the Core Arcana, but can work with the Dice Cards as well.
•If you’re not using one or both of the Arcana decks, consider using a card per player as an initiative tracker: show the art when you haven’t taken your turn yet, flip it over when you have.
•Each Dice Card has a set of symbols on it: A mix of one to three Moons and/or Suns, or an Eclipse. Eclipses are found on unique cards. More symbols are found on cards where the dice combination is rarer.
•You can tie “variable effect” stunts into these symbols; +1 per Moon or Sun, for example, with a special big effect when an Eclipse is drawn.