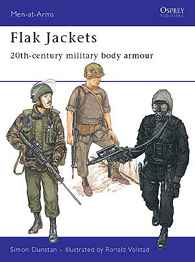 Beginning in World War I, with the introduction of the steel helmet this book charts the development of protective equipment for soldiers and security forces. Initially body armour was seen as a military luxury that could be ill-afforded. However, the success of ‘flak suits’ as worn by some bomber crews during World War II convinced the armed forces of the need to develop protection for the ground soldier against small arms fire. The scientific development of the modern flak jacket is traced as are the field trials conducted in Korea and later Vietnam. Extensive illustrations and photographs accompnay the text.