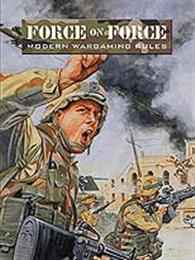 Force on Force brings the drama and action of modern warfare to the tabletop using miniature soldiers. The rules cover all aspects of modern warfare from the confidence and supply level of troops to air-strikes and off-board artillery and accommodates scenarios set anywhere from the end of World War II to the conflicts on today’s news without sacrificing either character or playability. Quick to learn and play, the game rewards players who use well-considered modern tactics to try and achieve victory. From infantry and armor to artillery and air support, Force on Force presents everything that players need to recreate post-World War II warfare involving both conventional, combined-arms forces and the irregular guerrilla units that have become the hallmark of 21st century warfare.