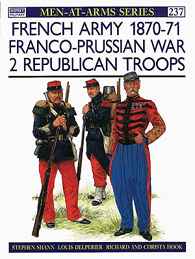 The capitulation of Napoleon and his army at Sedan in September 1870 shook Paris to its foundations. The Second Empire was swept from power, and a Government of National Defence hastily put in its place. To replace the weakened professional army the French called for a ‘war of the people’. A companion volume to Men-at-Arms 233: The French Army 1870-71 Franco-Prussian War (1) Imperial Troops, this book covers the forces that participated in the second half of the campaign, including the regular army, l’ Armee d’ Afrique, la Garde Mobile, la Garde Nationale and the naval forces. The text is accompanied by contemporary photographs and detailed colour plates.