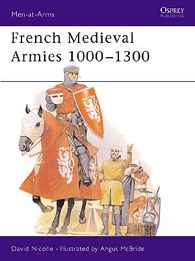 By the 11th century the French King had lost control of border regions, while local warfare had grown alarmingly frequent. In fact the energies of the French military elite were now focused on petty internal squabbles and external adventures like the Norman conquest of England. Nevertheless, the population and economy both expanded, although it was not until the 12th century that the crown rebuilt its power-base. Despite its slow start when compared with neighbours like England, the Kingdom of France had, by the 13th century, risen to become the most powerful state in Western Europe. This title describes the organisation, history and tactics of French medieval armies.