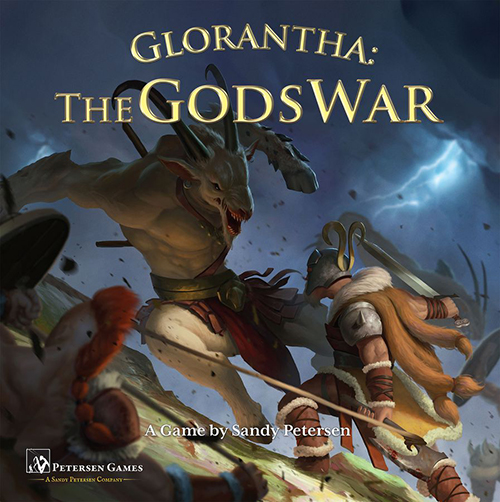 Glorantha: The Gods War is a competitive strategy game in which 3 or 4 players (3 to 8 players with the Empires expansion) summon units (minions, heroes, lesser gods and usually one greater god); construct buildings (usually Shrines, Temples, and Ziggurats) and clash in mortal combat. The players seek to build their own strength and destroy their enemies by killing their enemies’ units and capturing and destroying their enemies’ buildings, to achieve Heroquests and thus earn gifts, and to earn runes with unique effects. Each empire has its own, and different, unique ability, weakness, greater god ability, units, Heroquests and gifts. For example, the Darkness empire features trolls, the Mistress (Cragspider), shades, and the Hellmother (Kyger Litor), while the Sky empire has archers, the Emperor, phoenixes, and the Sun God (Yelm). These are not just the same units with different names, but also have different abilities, as do their buildings. Chaos has both different buildings, three greater gods (the Unholy Trio) and a different agenda to the other empires. The game has a world-shattering “mythic” feel to it rather than a “fantasy adventure” sensation.