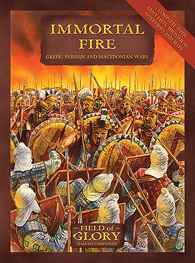 Providing accessible and informative coverage of the Greek, Persian and Macedonian armies, Immortal Fire details conflicts such as the Spartan stand at Thermopylae, Alexander’s victory at Gaugamela, and his fight for the Granicus River. Well-designed, visually stunning and with detailed historical overviews of each army, these comprehensive army listings, with supporting maps and artwork, allow gamers to recreate some of the most legendary battles in history. Take on the role of the world’s greatest tacticians and soldiers and change history.