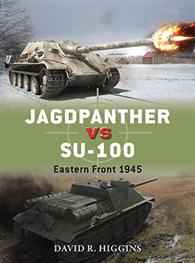 As World War II in Europe reached its end, armour development and doctrine had experienced several years of massively accelerated change, especially within the crucible of the Eastern Front. The German Jagdpanther and Soviet SU-100, both turretless tank-destroyer designs based on a ‘traditional’ turret-tank chassis, were the culminating examples of how the progression of experience, resources and time constraints produced vehicles that were well suited for roles of defence and offence, respectively. The Jagdpanther represented a well-balanced solution and an excellent use of limited resources, while the SU-100 was a natural progression of the SU-85, where numbers produced compensated for rudimentary construction, poor crew comfort and limited optics.