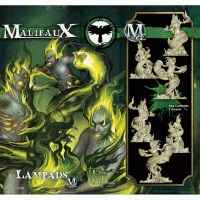 During the days of the first Breach, conflict erupted between the miners of Prosper and their Council overseers. The mages reacted with violence, and at some point, the coal deposits beneath the town caught fire.  Prosper fell into a sinkhole, and a century later, those fires are still burning. The souls of the dead became Lampads, sentient flames that are capable of taking control of corpses.  They “ride” these flaming corpses in order to travel beyond the borders of their smouldering home, creating new Lampads each time someone succumbs to their magical flames.