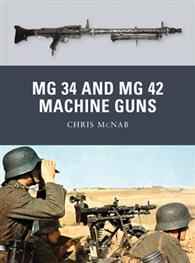 With the MG 34, the German Wehrmacht introduced an entirely new concept in automatic firepower – the general-purpose machine gun (GPMG). In itself the MG 34 was an excellent weapon: an air-cooled, recoil-operated machine gun that could deliver killing firepower at ranges of more than 1,000m. Yet simply by changing its mount and feed mechanism, the operator could radically transform its function. On its standard bipod it was a light machine gun, ideal for infantry assaults; on a tripod it could serve as a sustained-fire medium machine gun. During World War II, the MG 34 was superseded by a new GPMG – the MG 42. More efficient to manufacture and more robust, it had a blistering 1,200rpm rate of fire. Nicknamed ‘Hitler’s buzzsaw’ by Allied troops, it was arguably the finest all-round GPMG ever produced, and alongside the MG 34 it inflicted heavy casualties. Featuring specially commissioned full-colour artwork and drawing upon numerous technical manuals and first-hand accounts, this study explores the technological development, varied roles and lasting influence of the revolutionary MG 34 and MG 42 machine guns and their postwar successors.