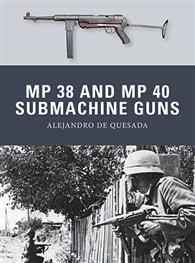 Nazi Germany’s MP 38 and MP 40 submachine guns are among World War II’s most recognizable weapons. Portable and with folding stocks, both were widely issued to airborne troops and became the hallmark of Germany’s infantry section and platoon leaders. A million were produced during the conflict – and many found their ways into the hands of paramilitary and irregular forces from Israel to Vietnam after the war. Featuring specially commissioned full-color artwork and period and close-up photographs, this is the story of the origins, combat use, and lasting influence of two of World War II’s most famous firearms.