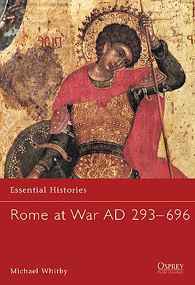 In the early third century AD the Roman Empire was a force to be reckoned with, controlling vast territories and wielding enormous political power from Scotland to the Sahara. 400 years later this mighty Empire was falling apart in the face of successive problems that the rulers failed to deal with. In this challenging new volume Michael Whitby tackles the fundamental issues (such as the rise of Christianity) that led to the ‘decline and fall’ of the Roman Empire, and offers a startling reassessment of the performance of the late Roman army.