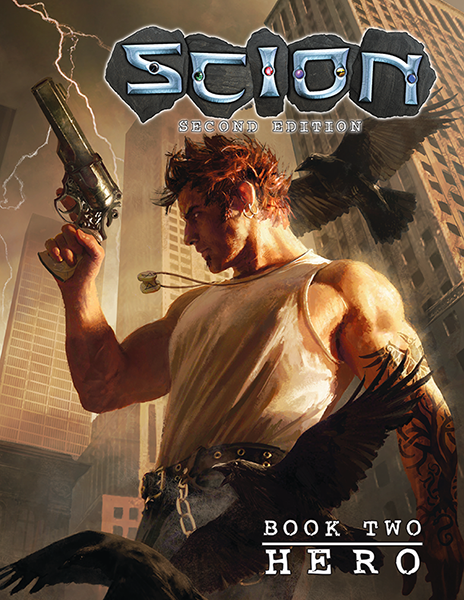 The savage Titans have escaped their eternal prisons to wage war against the Gods once more. Their battles in the lands of myth have spilled over into our World. But even the Gods cannot stop their personal rivalries and squabbles long enough to care for the peoples who worship them.

Find your destiny and seize your birthright. Scion: Hero details the children of the Gods when they have been touched by the divine, awakening to the miraculous power their parents wield.

But this great power comes with grave responsibility. The Scions must negotiate both the human World and the divine one, acting as intermediaries and shielding the worshippers of their parents from harm. Can they struggle to fulfill their Fate and still remain tied to what they care for most?

This book includes:
•Knacks and Boons, the incredible miracles wielded by Scions, powered by the Storypath system.
•Character-creation systems for Heroes, the first step of a Scion’s evolution towards divinity.
•Ten pantheons: the Algonquian, Aztec, Chinese, Egyptian, Japanese, Greek and Roman, Hindu, Irish, Norse, and Yoruban Gods, all suitable for parentage of your Scion.
•Advanced information on the World, the setting of Scion, complete with fearsome enemies to oppose your Scion.

Note this is not a stand-alone rulebook. Scion Second Edition: Origin has the necessary core rules for the game.