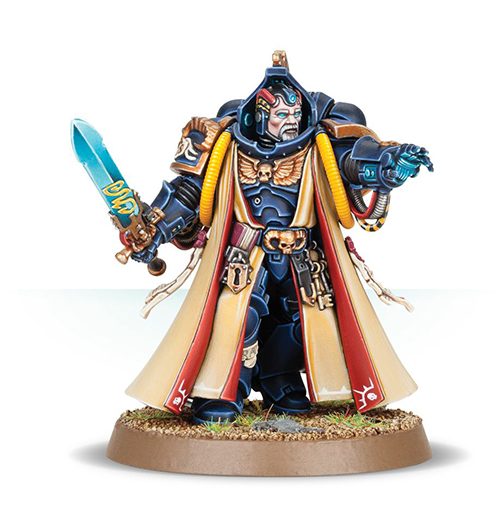 Eyes blazing and fists crackling with roiling energies, Space Marine Librarians stride into battle to destroy their foes. Some hurl blasts of warp-force that crush their victims to paste, while others twist the flow of time itself or revitalise their brothers with incredible dynamism. However they choose to fight, all Librarians are potent psykers, harnessing their potent mutation and a force to defend Humanity.

This multi-part plastic kit contains the components necessary to assemble a Primaris Librarian. Clad in Mk X power armour, his accoutrements are many and elaborate, from his ornate multi-layered cloak to the detailed wiring going into his psychic hood. He comes armed with a force sword in his right hand, and features a holstered bolt pistol along with a whole host of interesting trinkets – a padlocked book on his belt (potentially holding some galaxy-shaking secrets…), several large keys, purity seals on his cloak and backpack and a clasp featuring an Imperial Eagle.

The Librarian comes with a choice of two heads – one helmeted with a psychic hood and one bare-headed, with the terminals of the psychic hood clearly visible. The right shoulder pad and belt buckle feature ram’s heads – the insignia of the Librarius – and the left shoulder pad is blank and smooth, meaning the markings of your preferred Chapter can be easily applied.

The Primaris Librarian comes as 20 components, and is supplied with a Citadel 40mm Round base. The kit also includes an Ultramarines-Character Transfer Sheet, which features Captain, Chaplain, Librarian and Lieutenant iconography.