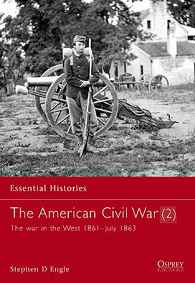 The American Civil War’s vast Western Theater witnessed enormously important military campaigning during the period 1861-1863. This book, the third in a four-volume series, examines the geographical, logistical and strategic factors that shaped fighting in this theater, as well as assessing officers who played key roles . It covers the story of Ulysses S Grant’s important capture of rebel positions before marching south to win the battle of Shiloh, as well as that of Albert Sidney Johnston, the pride of the Confederacy. Finally, it details the dramatic events of the siege of Vicksburg, the Confederates final fortress.