Home > Products > Board Games > The Arrival 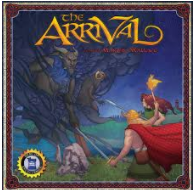 Famed game designer Martin Wallace’s (Age of Steam, Brass) acclaimed new game transforms players into tribe leaders in ancient Ireland―back when it was known as Erin―who have arrived to fight the demon-like Fomori that rule the island. As they vie for control over territories with the other tribes, players utilize actions that let them build and protect fortifications and repel and spread the Fomori, choosing how ruthless they wish to be.

The unique mechanics of the game include two different tracks that will determine victory: the Fame Point Track and the Corruption Track. Players must make decisions on how to gain resources, either gaining more resources (spreading their tribes more quickly) and more Corruption Points or gaining fewer resources (risking losing ground to the other tribes and the Fomori) and more Fame Points. The winner is either the one with the highest amount of Fame Points or the one with the fewest Corruption Points, the path to victory depending on whether the tribes or the Fomori control more locations at the end of the game.