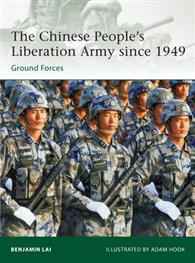 The Chinese People’s Liberation Army (PLA) is the largest army in the world. China is predicted to be on the brink of overtaking the USA as the world’s largest economy, and China’s military capabilities and global ambitions are the single greatest long-term pre-occupation of Western governments. The PLA has progressed steadily – if slowly – since its creation in 1949, from a mass army of unsophisticated infantry limited to ‘human wave’ tactics into a highly sophisticated force with wide capabilities. The most recent reforms (1989 to the present day) have been made possible by massive economic liberalization, and have seen not only the modernization of all the armed forces but the beginnings of global outreach, even including Chinese participation in UN peace-keeping missions to Africa, the Middle East, and Haiti. Featuring rare photographs and specially commissioned color artwork, this study explores the developing structure, organization, equipment, appearance, and character of the Chinese People’s Liberation Army from its creation until today.