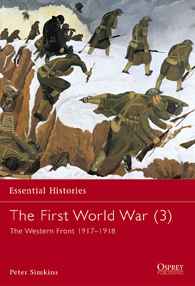 In this, the second volume covering the war on the Western Front, Peter Simkins describes the last great battles of attrition at Arras, on the Aisne and at Passchendaele in 1917. Then he moves on to relate the successive offensives launched by Germany in the spring and summer of 1918 in an effort to achieve victory or a favourable peace before American manpower proved decisive. Again, questioning and correcting several myths and long-held assumptions about the nature and conduct of war on the Western Front, the author also looks at the aftermath and legacy of the ‘war to end wars’.