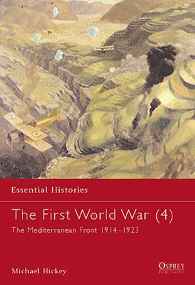 The First World War in the Mediterranean represented more than just a peripheral theatre to the war on the western front. This engaging volume includes details of allied attempts to capture Constantinople; bloody campaigning in Northern Italy; the defence of the Suez Canal and the defeat of the Turkish army in Palestine. The Arab revolt, skirmishes in North Africa and the entrapment of a huge allied garrison in Greece – the ‘worlds biggest prison camp’ as the Germans described it – are also covered. The result was the fall of the Ottoman and Austro-Hungarian empires and the birth of nations unknown in 1914.