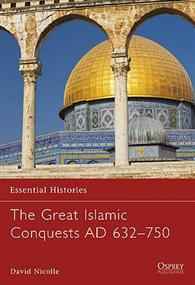 Few centuries in world history have had such a profound and long-lasting impact as the first hundred years of Islamic history. In this book, David Nicolle examines the extensive Islamic conquests between AD 632 and 750. These years saw the religion and culture of Islam erupt from the Arabian Peninsula and spread across an area far larger than that of the Roman Empire. The effects of this rapid expansion were to shape European affairs for centuries to come. This book examines the social and military history of the period, describing how and why the Islamic expansion was so successful.