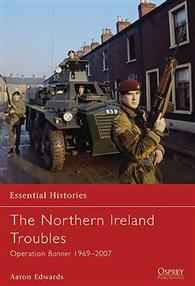 The British campaign in Northern Ireland remains one of the most controversial actions in recent history. This new book by Aaron Edwards considers the strategic, operational and tactical aspects of what become the longest ever campaign embarked upon by British troops. The 38-year campaign, codenamed Operation Banner, went through a number of phases. It began as a peacekeeping operation, morphed into a counter-insurgency operation and ending as a policing and counter-terrorism force. Banner was massive in scale. No less than 10,000 troops were on active service throughout the campaign and at one point as many as 30,000 men and women were deployed on Ulster’s streets. Drawing on extensive new research, this book presents an authoritative introduction to the ‘Troubles’, providing a strategic analysis of the successes and failures of the campaign.