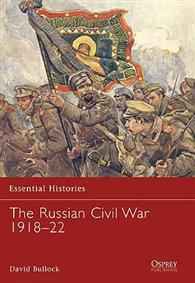 The Russian Civil War is the most important civil war of the 20th century, changing the lives of over half a billion people and dramatically shaping the geography of Europe, the Far East and Asia. Over a four-year period 20 countries battled in a crucible that would give birth to Communist revolutions worldwide and the Cold War. David Bullock offers a fresh perspective on this conflict, examining the forces involved, as well as the fascinating intervention by Allied forces. At the dawn of modern war, as cavalry duelled with tanks, aircraft, and armoured trains along shifting fronts, this title tells a military story enacted against a backdrop of political and social revolution and within the context of immense human loss. The reader cannot fail to be moved by the rare photographs and illustrations that make this history come alive.