The Second War of Italian Unification 1859-61 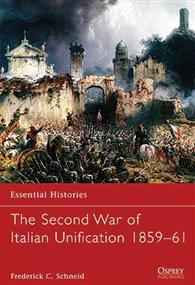 The Second War of Italian Unification 1859-61

The culmination of decades of nationalist aspiration and cynical Realpolitik, the Second War of Italian Unification saw Italy transformed from a patchwork of minor states dominated by the Habsburg Austrians into a unified kingdom under the Piedmontese House of Savoy. Unlike many existing accounts, which approach the events of 1859-61 from a predominantly French perspective, this study draws upon a huge breadth of sources to examine the conflict as a critical event in Italian history. A concise explanation of the origins of the war is followed by a wide-ranging survey of the forces deployed and the nature and course of the fighting – on land and at sea – and the consequences for those involved are investigated. This is a groundbreaking study of a conflict that was of critical significance not only for Italian history but also for the development of 19th-century warfare.