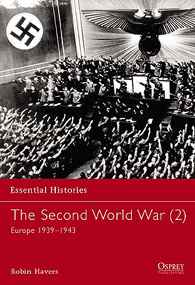 While many of the participants were the same as the First World War, this conflict was far more than a re-match of 1914-1918. The Second World War was even more destructive than the first and the added ideological element meant that this war was far crueller.This book details the first four years of the war in Europe. It discusses how and why Hitler’s resurgent Germany plunged into war, and examines the German successes against Poland, France and the Low Countries.