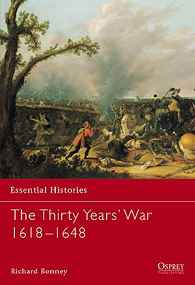 More than three and a half centuries have passed since the Peace of Westphalia ended the Thirty Years’ War (1618-48); but this most devastating of wars in the early modern period continues to capture the imagination of readers: this book reveals why. It was one of the first wars where contemporaries stressed the importance of atrocities, the horrors of the fighting and also the sufferings of the civilian population. The Thirty Years’ War remains a conflict of key importance in the history of the development of warfare and the ‘military revolution’.