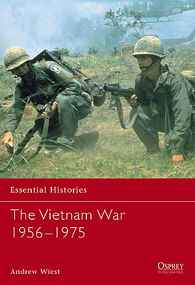 The Vietnam War was arguably the most important event, or series of events, of the American Century. America entered the brutal conflict certain of its Cold War doctrines and certain of its moral mission to save the world from the advance of communism. As this book explains, however, the war was not at all what the United States expected. Outnumbered and outgunned the North Vietnamese and Viet Cong forces resorted to a guerrilla war based on the theories of Mao Zedong of China. This was war reduced to its most basic level – find the enemy and kill him.