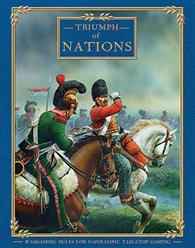 In 1812, after a period of considerable victories, Napoleon found himself fighting on two fronts, suffering setback after setback. With his forces in Spain being pushed back, Napoleon launched an invasion of his former ally, Russia, leading the half-million-strong Grande Armee to Moscow and a brutal defeat at the hands of Russian forces and the bitter winter. On the defensive, Napoleon was defeated and exiled, but returned to lead his loyal armies against a coalition of European nations in a final campaign that culminated at Waterloo. Triumph of Nations, a companion for Field of Glory Napoleonic, provides players with all the army lists and details they need to recreate the battles of the later Empire, from the disastrous invasion of Russia to the glorious Hundred Days.